India's hospitals are struggling to cope with shortages of beds, medicines and oxygen
1 of 16 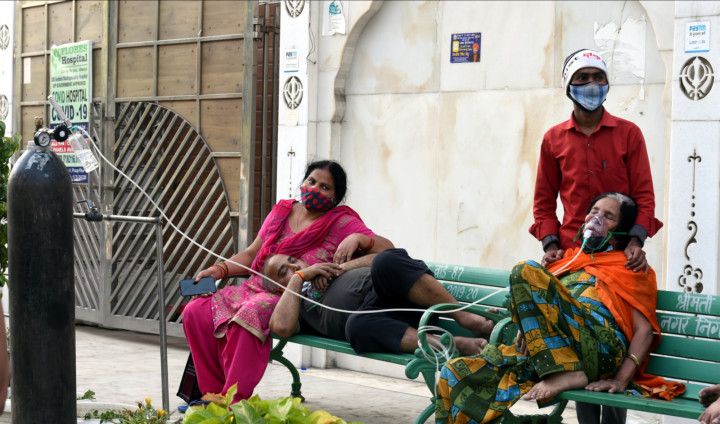 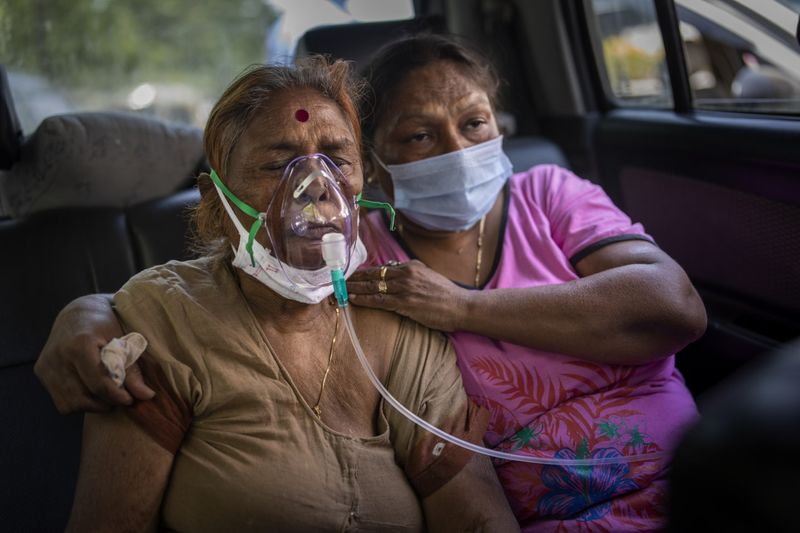 They arrive in their cars, on foot or in three-wheeled taxis, desperate for a mask and tube attached to the precious oxygen tanks outside the gurdwara in a neighborhood outside the capital, New Delhi.Image Credit: AP 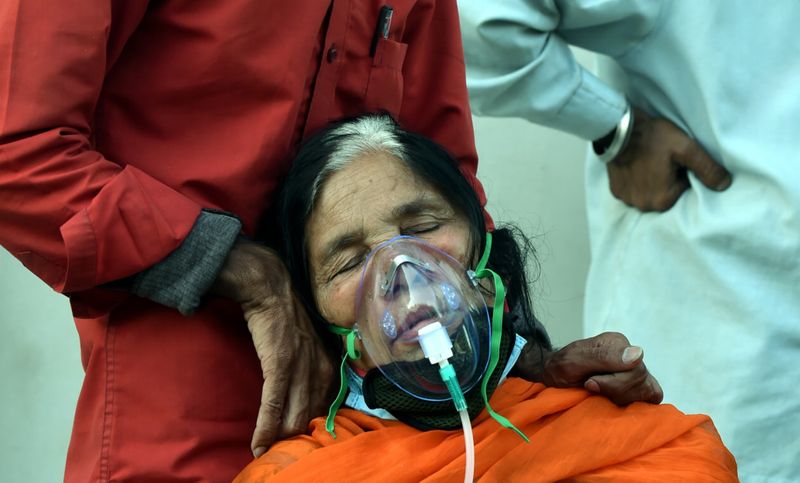 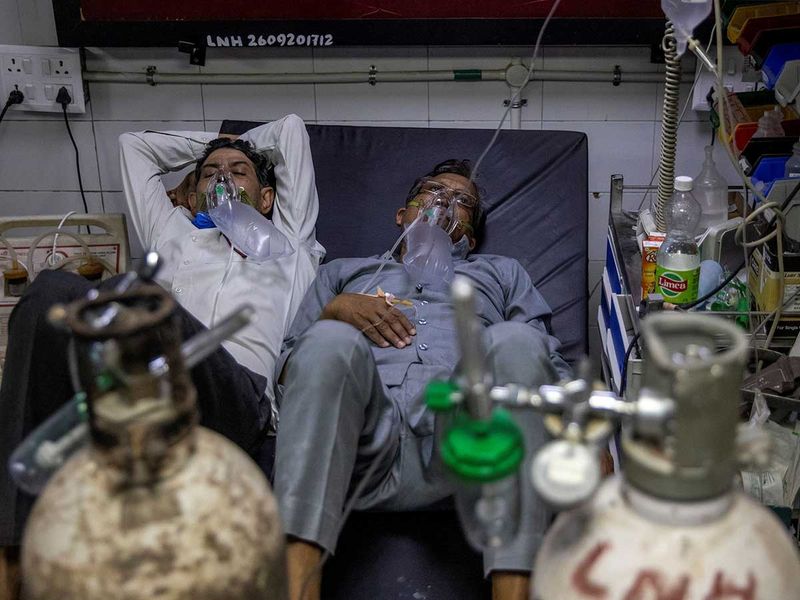 After having largely tamed the virus last year, India is in the throes of the world's worst coronavirus surge and many of the country's hospitals are struggling to cope with shortages of beds, medicines and oxygen.Image Credit: Reuters 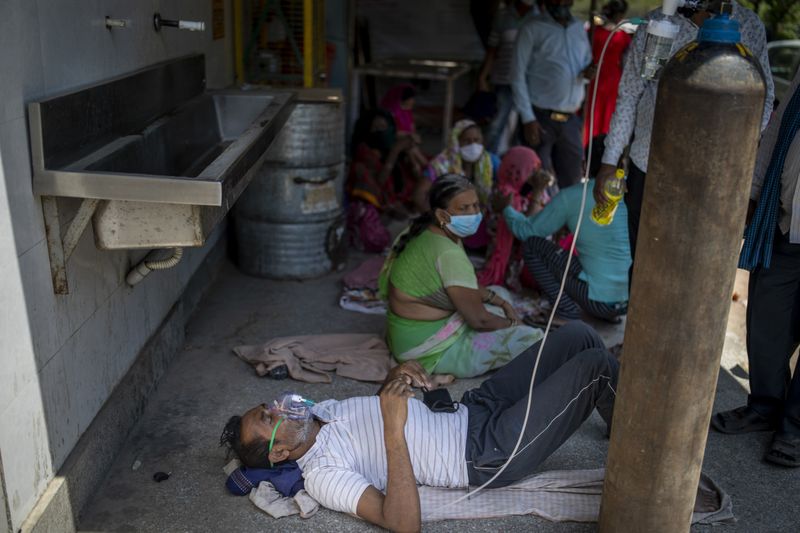 The gurdwara management has promised to provide free oxygen to patients until they can be admitted to a hospital. Teams of volunteers check oxygen levels of newly arrived patients and provide what they need.Image Credit: AP 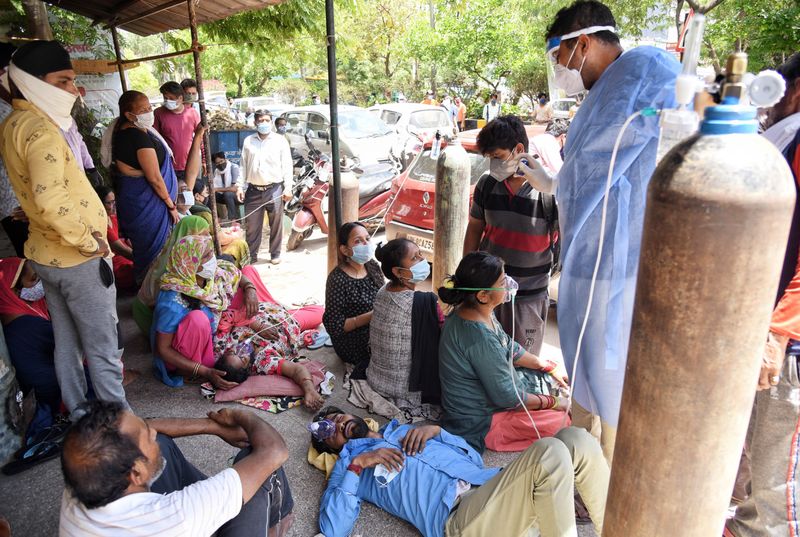 The gurdwara started the initiative Thursday evening, and by Friday evening had seen over 700 patients come through, reported The Hindu newspaper. Most hospitals in India aren't equipped with independent plants that generate oxygen directly for patients, primarily because they require an uninterrupted power supply, which is a rarity in many states.Image Credit: ANI 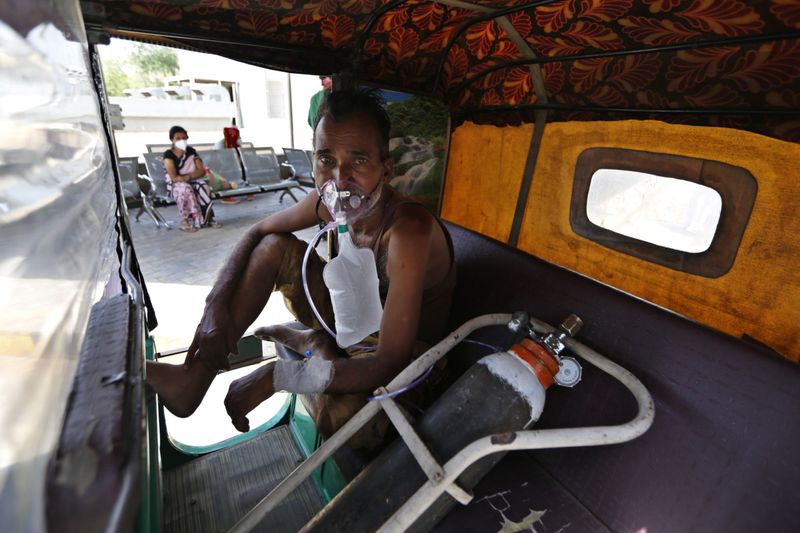 A COVID-19 patient breathes with the help of an oxygen mask as he waits inside an auto rickshaw to be attended to and admitted in a dedicated COVID-19 government hospital in Ahmedabad.Image Credit: AP

Most hospitals in India aren't equipped with independent plants that generate oxygen directly for patients, primarily because they require an uninterrupted power supply, which is a rarity in many states.Image Credit: AFP 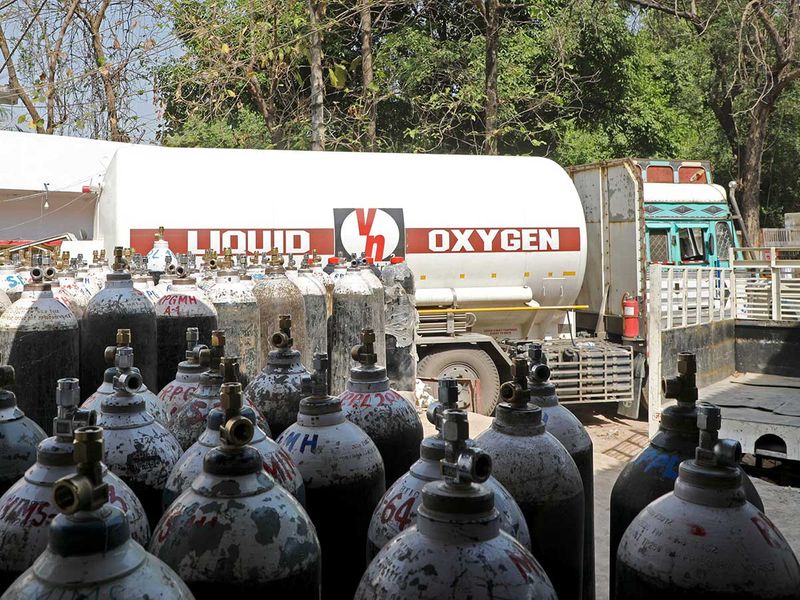 As a result, hospitals typically rely on liquid oxygen, which can be stored in cylinders and transported in cryogenic tankers. But amid the surge, supplies in hard-hit places like New Delhi are running critically short.Image Credit: ANI 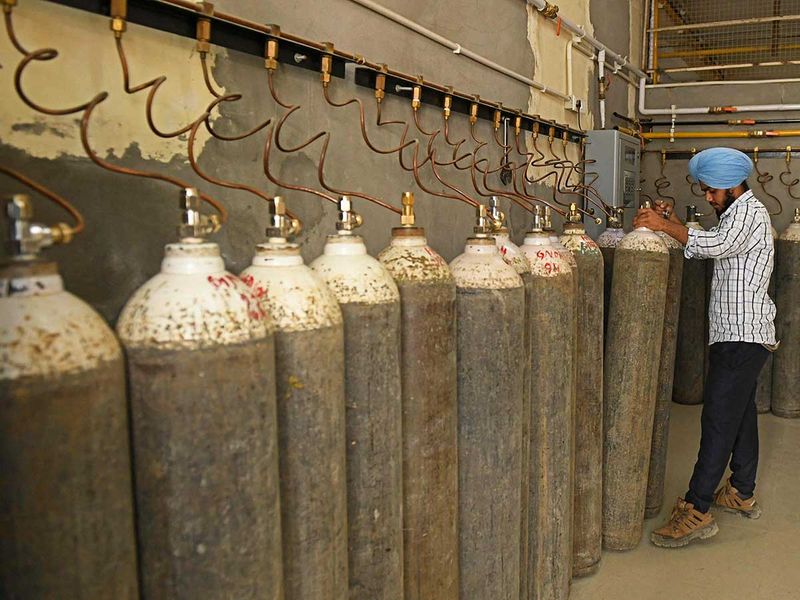 Last year, India kept its hospitals sufficiently stocked by diverting oxygen from industries that were shuttered by one of the world's strictest virus lockdowns.Image Credit: AFP

As Indians were cooped up indoors for months, industrial tanks were repurposed for medical use. Tanker trucks raced over empty highways to transport oxygen across the vast country to hotspots.Image Credit: AFP

But with the current wave, blamed on a highly contagious variant that has spread quickly and widely without the limiting benefit of a nationwide lockdown, the situation is different.Image Credit: AFP

Scores have died in hospitals in India's capital amid suggestions that low oxygen supplies were to blame. Doctors have taken to social media to beg public authorities to get them resupplied, and the government has mobilized to bring oxygen supplies by train, plane and truck.Image Credit: AP 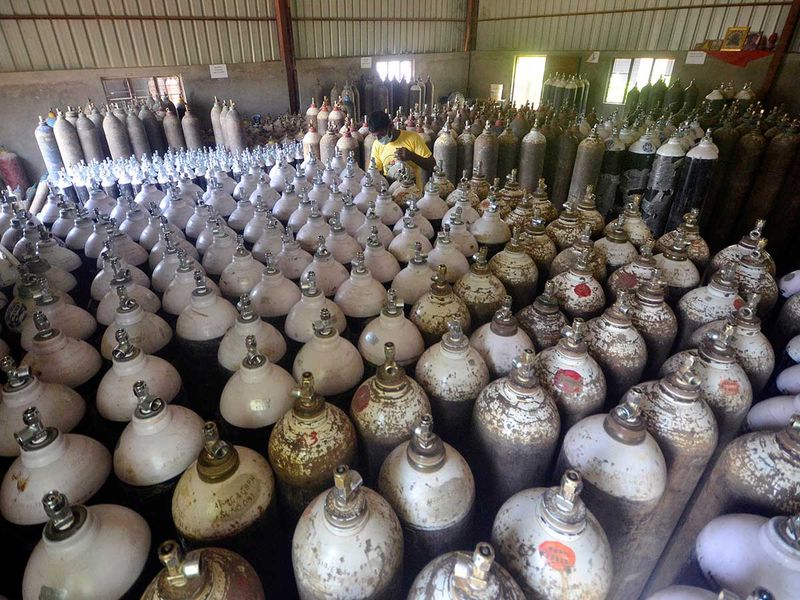 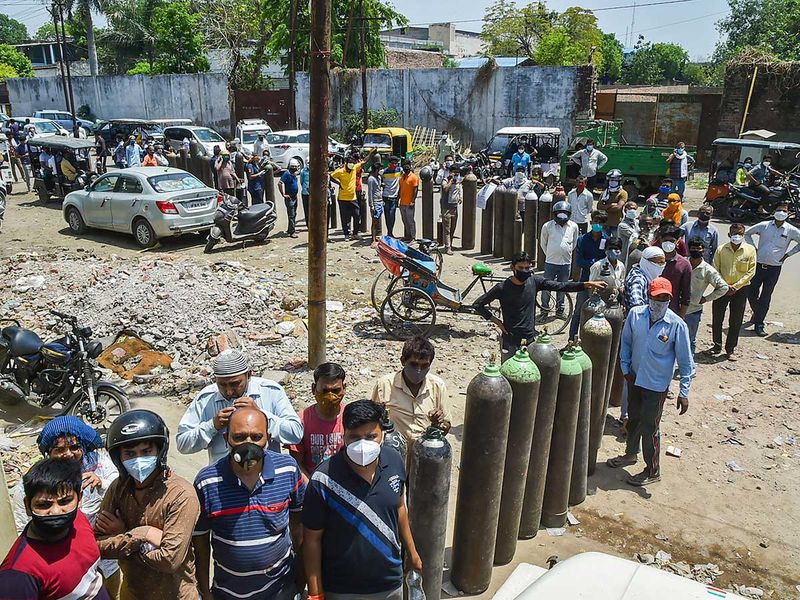 Family members of COVID-19 patients wait to fill their empty cylinders with medical oxygen outside an oxygen filling center, as demand for the gas rises due to spike in coronavirus cases in Kanpur.Image Credit: PTI 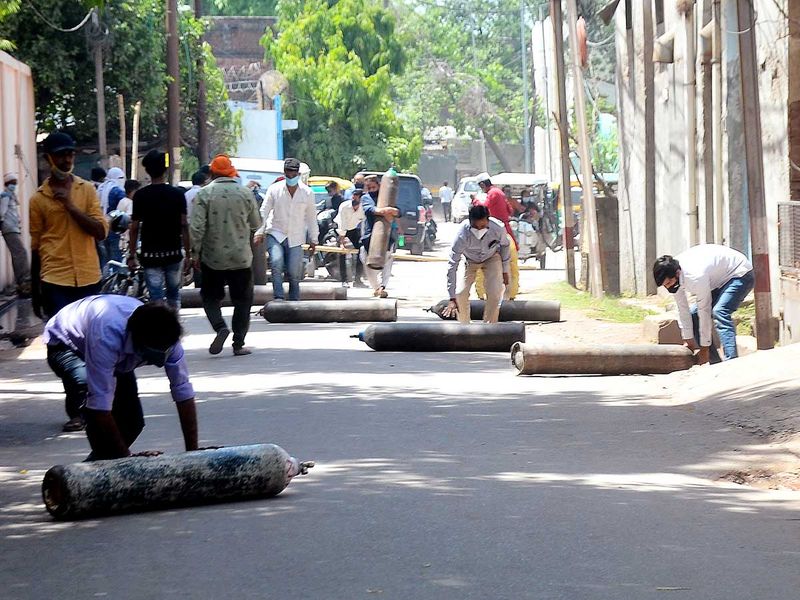 Saket Tiku, president of the All India Industrial Gases Manufacturers Association, said the biggest challenge has been transporting oxygen to where it's urgently needed.

下一篇：Photos: Anguish and fear as COVID-19 deaths and cases surge in India